Mission/History | Sternberger House | Board of Directors/Staff

About the Tannenbaum Sternberger Foundation

Our Mission
Born of the vision, foresight and generosity of Sigmund Sternberger, the Tannenbaum-Sternberger Foundation, Inc. is committed to improving the quality of life for residents of Guilford County, North Carolina.

Sigmund Sternberger was born in Darlington, South Carolina on May 8, 1887. He moved with his family to Greensboro, North Carolina in 1899 and remained a resident until his death in 1964. His father, Herman Sternberger, and uncle, Emanuel Sternberger, were the founders of Revolution Cotton Mill Corporation in Greensboro.

Throughout his life, Sigmund Sternberger was involved in numerous civic, charitable and religious activities. He served as Treasurer of Temple Emanuel for 47 consecutive years. He was an active member of Revolution Lodge No. 552, Ancient Free and Accepted Masons, which was founded by his father, and became a 32nd Degree Mason and a Knight Commander of the Court of Honor.

Above all, Sigmund Sternberger was a friend to others, especially those in need. He was a generous man, whose desire was that the Foundation he established would enrich the lives of residents of Guilford County. At his death in 1964, he was survived by his sister, Mrs. Rosa S. Williams, and by his niece, Mrs. Leah Louise B. Tannenbaum, both of whom provided strong and thoughtful leadership to the Foundation for so long as they lived. Along with other Directors, Leah Tannenbaum's four children now continue the family's leadership of the Foundation by serving on the Foundation Board. It is the hope of the Tannenbaum-Sternberger Foundation Directors that recipients of scholarship and other assistance available to them because of Sigmund Sternberger's generosity will be able later in life to continue this tradition of service by contributing money to their college or university or community programs serving people in need. 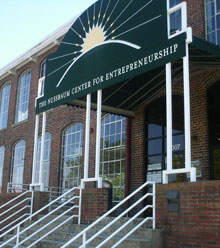