Mission/History | Sternberger House | Board of Directors/Staff

The Mediterranean-influenced home built by Sigmund Sternberger in 1926 on Summit Avenue was considered a masterpiece of construction in its day. Upon its completion, Mr. Sternberger and his sister, Miss Rosa Sternberger, settled in. In 1938, in a wedding at the home, Miss Sternberger married R. Mack Williams, who came to live in the home with his new bride and brother-in-law. For thirty years, Mrs. Williams had the responsibility of seeing that household affairs, indoors and out, ran smoothly. She was especially fond of gardening. Under her supervision, the home's grounds were both lovely and productive, eventually featuring both formal and informal flower beds, blooming shrubs and trees, fruit trees, berry bushes and grape vines. Many fond memories of the home were created in the minds and hearts of family members.

The home became the property of the Tannenbaum-Sternberger Foundation following Mr. Sternberger's death in 1964. Foundation directors, including Mrs. Williams and her niece, Mrs. Leah Tannenbaum, were loathe to sell the home for fear it would be demolished. A happy solution was found in 1971, when the Foundation deeded the Sternberger House to the United Arts Council of Greensboro, Inc. Originally, the Arts Council housed its offices in the home. Today, the home, now known as the Sternberger Artists Center, is alive with creativity. Studio space in the Center is made available at very reasonable rates to artists, who have included writers, painters, photographers, potters and others. Carefully and lovingly maintained, the beautiful old structure is thriving 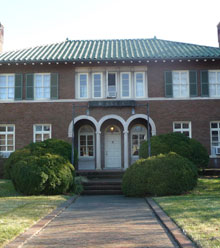